This 6-week program will prepare you to teach private and semi-private sessions on the apparatus utilizing the Advanced System. 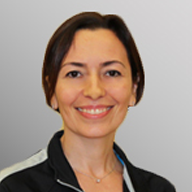 
Karine Cid, Occupational Therapist and Teacher trainer in charge of Power Pilates' Education program in Italy, has been teaching Pilates since 1987. After earning her degree she worked in the sector of functional rehabilitation, postural re education and athletic preparation. For over ten years she has studied directly with some of the elders most experienced teachers of the first generation, including Romana Kryzanowska, She also collaborated with the New York School in the didactic preparation of new students, reaching the highest professional level of the Pilates Method.

She is the author of several articles which have been published in leading international health and fitness journals and has held Teacher Training programs, conventions and continuing education courses in Europe, United States and South America.

Cancellations: If you withdraw from any program(s) you will automatically lose $150.00 processing fee. No refunds are issued for any reason. Students who choose to transfer programs or not to complete the training are still responsible for full payment of the course.